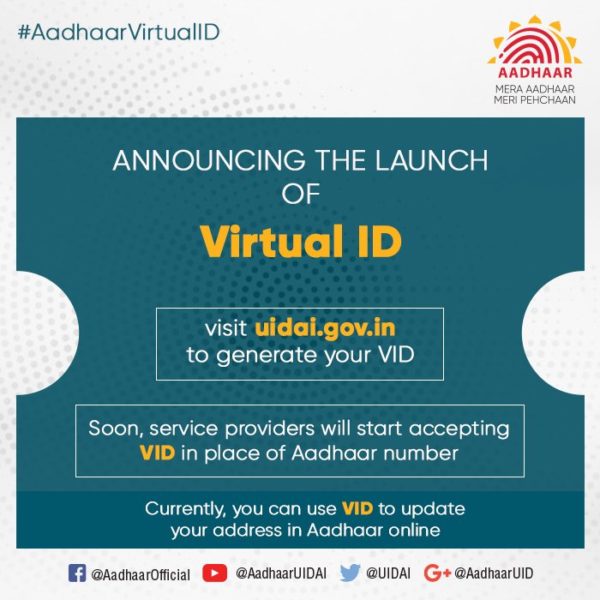 The idea was contemplated in January 2018, however the above image tweeted by UIDAI on  April 2, 2018 officially announced the launch of Aadhaar Virtual ID (VID). Prior to the launch of Virtual ID there was a lot of hue and cry about stealing of Aadhaar number and data theft thus challenging the Right to Privacy of the citizens. On the other hand, linking of Aadhaar with the services like filing of IT return, Mobile Number, Direct Benefit Transfer (DBT) etc, was also going on in full swing. Thus, the alternative of Aadhar VID was created to address the privacy and data theft concerns.

What exactly is this Aadhaar Virtual ID?

The Aadhaar Virtual ID is a digital and temporary 16 digit number randomly generated by the UIDAI’s resident portal which is mapped to the Aadhaar number. Since the VID is digital in nature, a person can generate it multiple times. If you generate a new VID the old one will be disabled. Also, the Aadhaar number cannot be derived using the VID thus reducing the risk of Aadhaar number being stolen by any entity.

How to Generate your very own Aadhaar Virtual ID today

With Aadhaar going digital, you also start using VID and get rid of problems associated with physical Aadhaar.

This site uses Akismet to reduce spam. Learn how your comment data is processed.