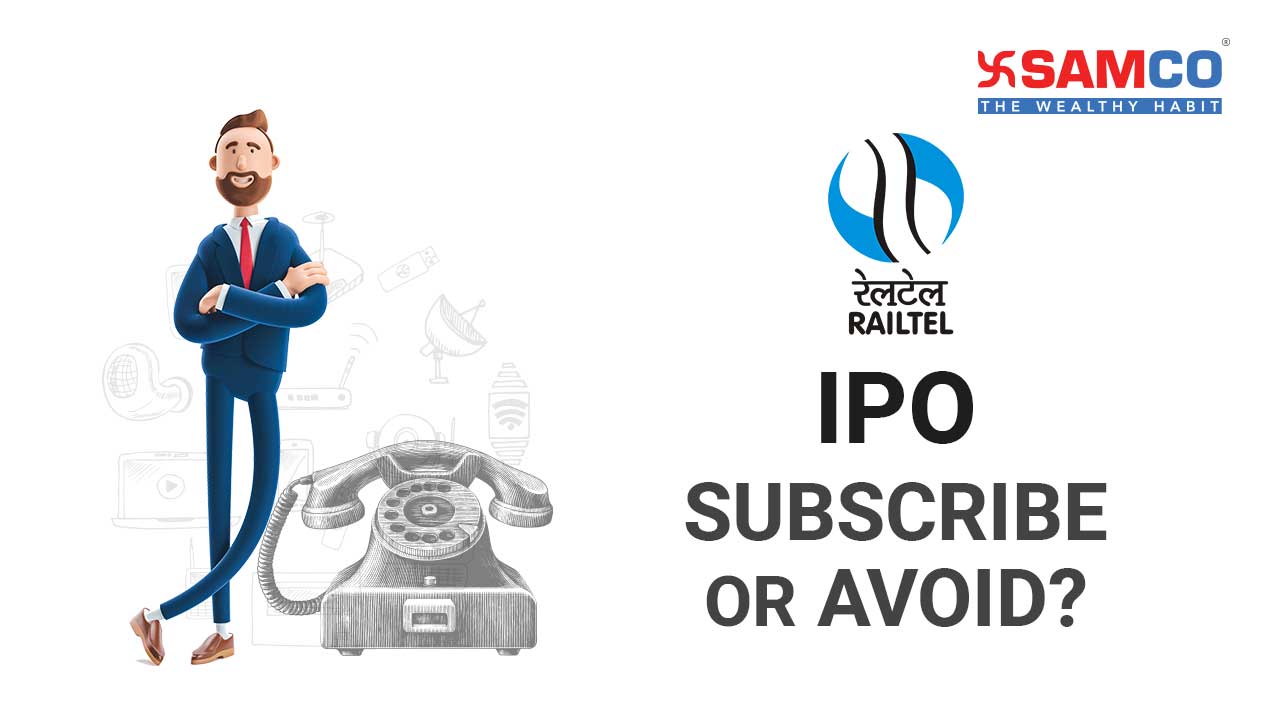 RailTel Corporation, wholly owned by the Government of India and administrated by the Ministry of Railways is coming up with an Rs 819 crore IPO, set to open on Tuesday 16th Feb. The issue will take place entirely through an Offer for sale by the government of India as it will be selling 27.17 percent of its stake. The objectives of the offer are to carry out the disinvestment. Hence, the company will not receive any proceeds from the offer and all proceeds will go to the government. Incorporated in 2000, RailTel Corporation is a public sector unit and is one of the largest Information and Communication Technology infrastructure provider which was established with the key objective to modernize telecom infrastructure. We recommend market participants to ‘subscribe’ to this IPO for listing gains only.
ABOUT COMPANY:
RailTel Corporation of India Ltd. (RailTel) is an information and communications technology ("ICT") infrastructure provider and one of the largest neutral telecom infrastructure providers in India. It is a Mini Ratna (Category-I) Central Public Sector Enterprise, wholly-owned by the Government of India and under the administrative control of the Ministry of Railways. The company was incorporated on September 26, 2000, with the aim of modernizing the existing telecom system for train control, operation and safety and to generate additional revenues by creating nationwide broadband and multimedia network by laying optical fiber cable by using the right of way along railway tracks.
As of January 31, 2021, RailTel's optical fiber network covers 59,098 route kilometers and covers 5,929 railway stations across towns and cities in India. The transport network is built on high capacity dense wavelength division multiplexing ("DWDM") technology and an Internet protocol/ multi-protocol label switching network over it to support mission-critical communication requirements of Indian Railways and other customers. As of January 31, 2021, under "Railwire" the company has 305746 customers and 5023 AMPs (Access Network Providers) and is an emerging key partner for Indian Railways.
It operates data centers in Gurugram, Haryana and Secunderabad, Telangana to host and collocate critical applications for customers including the Indian Railways. In addition to strategic and critical network infrastructure services, the company also undertakes various ICT projects for the Indian Railways, central government and state governments, including various train control system projects for Indian Railways. Telecom sector is expected to post CAGR of 11 percent to 13 percent till 2025 with rising ARPU.
RailTel has a strategic relationship with the Indian Railways and undertakes a wide variety of projects including the provision of mission-critical connectivity services such as Video Surveillance System ("VSS") at stations and within trains, 'e-Office' services, and implementing short-haul connectivity between stations and long haul connectivity to support various organizations within the Indian Railways. It also undertakes various passenger services including Content on Demand services and Wi-Fi across major railway stations in India. With the latest technologies and diversification plans, the company is gearing for steady growth going forward in India and neighboring countries.
Looking at the financial performance, RailTel is lagging on the growth front with revenues and profit growing only 7.5 percent and 2.5 percent respectively over FY18 to FY20. Over the same period, the company has reported an average EPS of Rs. 4.30 and an average RoNW of 10.47 percent. On the positive side, the company is debt-free and has cash worth 74 crores at the end of sept 2020. It consistently pays dividends with a dividend payout ratio of over 40 percent.
KEY OPPORTUNITIES:
Covid-19 pandemic has triggered higher demand for wired broadband services, VPN services due to work from home requirements, and also data centers. The lockdown has resulted in people spending more time at home, leading to a rise in average data consumption by 20 percent which will benefit the company.
Pre-requisite for launch of 5G services: An important 5G ecosystem pre-requisite is optic fiber networks. India lags considerably with less than 30 percent fiberisation compared to over 70 percent in the US and China. India needs to lay another 1 to 1.2 million fiber kilometers in order to be prepared for 5G which is a key opportunity for RailTel.
Indian Railways to offer significant opportunities: Also, Indian Railways is focusing on enhancing passenger experience by enabling suitable technology to introduce SMART coaches on its network. The network is aiming to include 115 modern features like CCTVs with facial recognition, emergency talk-back system, Wi-Fi infotainment system etc. Therefore significant opportunities are expected from the Indian Railways
KEY RISKS:
Highly Regulated: The telecommunications industry in India is highly regulated and changes in any laws or policies could potentially affect the business.
Highly Dependent on PSUs, Indian Railways and Government Entities: The Company is also highly dependent on PSUs, Indian Railways and Government entities for their revenues. Any changes in government policies or budgetary allocations could affect existing as well as the proposed projects.
Concentration Risk: RailTel derives a substantial portion of revenues from three key customers, the National Informatics Centre Services Inc., the Indian Railways and the Employees’ State Insurance Corporation of India. Revenue generated from these three customers represented 23.82 percent  in FY20. This has been reduced from 42 percent  in FY18, which is a good sign but is still very high.
CONCLUSION:
At the upper IPO price band of Rs 94 and on the basis of FY20 earnings the offer is valued at a price/earnings of around 21.36 times which appears to be fairly priced.  Also currently the company is commanding a good grey market premium. Keeping the risks and low rate of growth in mind, We recommend market participants to ‘subscribe’ to this IPO for listing gains only.