Now we sure are big fans of monopoly stocks. But do you know who else loves monopoly stocks? Its non-other than Investing legend, Mr. Warren Buffett. Yes, he has made most of his wealth by investing in monopoly stocks. He refers to these stocks as companies with economic moats. What is a moat? Let’s find out with this example. 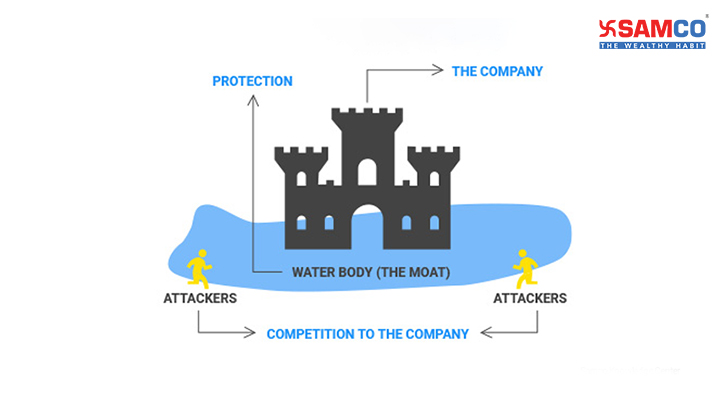 Historically, a moat is a big valley dug all around a medieval castle which is filled with water. It is dug deep to prevent the attackers from entering the castle. So, the wider the moat, the more protected the castle is.

Let’s consider the castle to be a company and the attackers to be its competitors. If a company has a deeper market share or a moat in their industry, then it will be difficult for its competitors to survive and compete with the company having the moat.

But the question is…how will the company achieve this competitive edge over its peers? Well, by fulfilling this checklist.

Now, investing in a monopoly stock has major benefits. These companies have prolonged existence and have a history of generating revenues even in adverse economic conditions. In addition, generally monopoly stocks also provide dividends to its investors.

How does a company achieve a strong monopoly in the markets?

Firstly, monopoly stocks have pricing power in their hands. What does this mean? Well, it simply means that even if the monopoly company decides to increase the prices of its goods or services, you will still buy their products. For example, imagine you want to buy a BMW car. BMW is a reputed car company. Owing a BMW is a status symbol. Now, even if BMW increases the price of its car, you will still buy it.

Now the question is…what made you buy the product even at a high price? Well, it is simply the impact of a high switching cost.

What is switching cost?

It is the cost that the customer would incur to switch from one product to another. Companies with high pricing power and a wider moat make it tough for their customers to use a competitor’s product by offering a unique features in their product. The unique feature is a competitive advantage and hence such monopoly stocks have a bright future.

The second reason that makes monopoly stocks unique is the goodwill of the company.

Monopoly companies have extraordinary brand recognition. That’s because they have invested a lot of time in adding a unique quality to their product. Not just that… the company has also invested a huge amount in marketing and building a huge distribution network.

Because of these reasons, monopoly stocks have the ability to turn into multi-baggers in the future.

List of Monopoly Stocks Listed on the Indian Stock Exchanges 2022

Let’s look at the each of these monopoly stocks in detail. 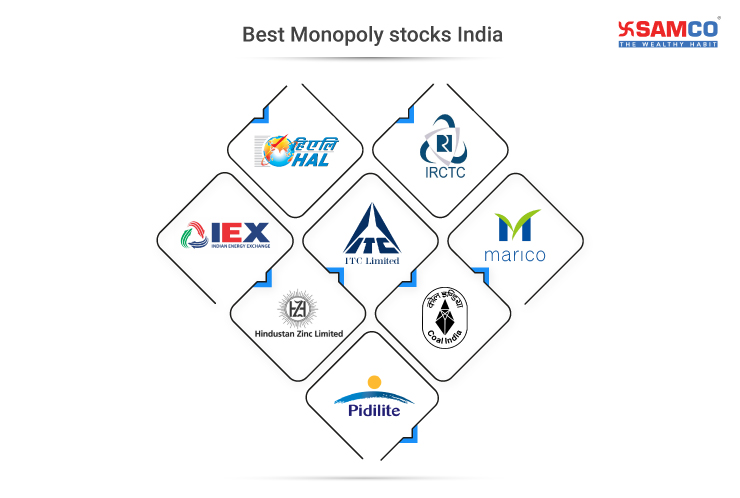 Indian Railway Catering and Tourism Corporation Ltd. is a Mini Ratna of India. It offers services like ticketing, selling of packaged water bottles and catering to the Indian Railways. IRCTC is the only company in this segment and hence it is a true monopoly in the railway sector. In the last quarter, the company had a total sale of Rs. 540 crores. Here is the revenue breakup of IRCTC – 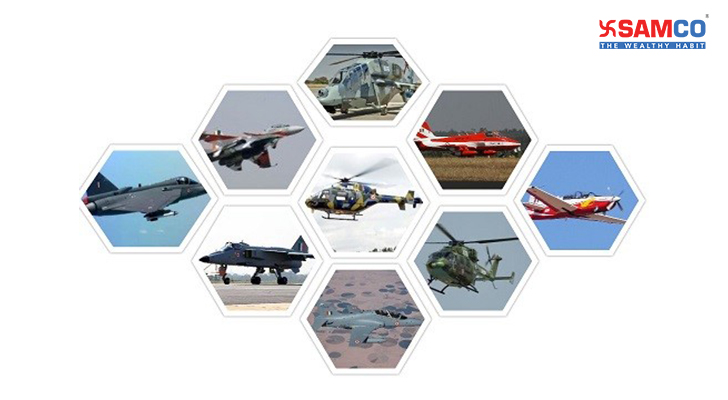 Hindustan Aeronautics Ltd. is another leading monopoly stock in India from the Indian defence sector. The company was set up in Mysore in 1940 by Mr. Walchand Hirachand. Currently, it is a state owned business. It designs and manufactures fighter jets, helicopters, jet engines, marine gas turbine engines, and a lot more for the Indian military.

The Indian Energy Exchange (IEX) is the country’s first and largest electricity exchange. It’s an online marketplace where traders can trade in energy. Not just this, but you can also trade in the electricity market, green energy and renewable energy certificates.

IEX is a monopoly stock because it has the maximum number of transactions for trading electricity. Moreover, the company is continuously innovating according to the latest digital trends. It is also trying to automate the entire market operation by using Robotic Process Automation to improve forecasting models and reduce the time taken to execute each transaction.

The company has almost 95% monopoly in the energy exchange space. That is because 95% of energy exchange happens on IEX. And because there are multiple buyers and sellers quoting different prices, it increases liquidity and you can buy energy at a competitive rate.

In the last year, the stock offered a CAGR return of 104%. The promoter holdings of the company is zero but, the Foreign Institutional Investors (FIIs) hold a 31.01% stake. DIIs hold a 17.66% stake and the public holding is 51.02%.

The distant competitor of the company is National Commodity and Derivatives Exchange Limited (NCDEX) with a market share of around 7%.

In the last quarter, the company had recorded a total sale of Rs. 90 crores. Let’s take a look at the revenue breakup of the company. 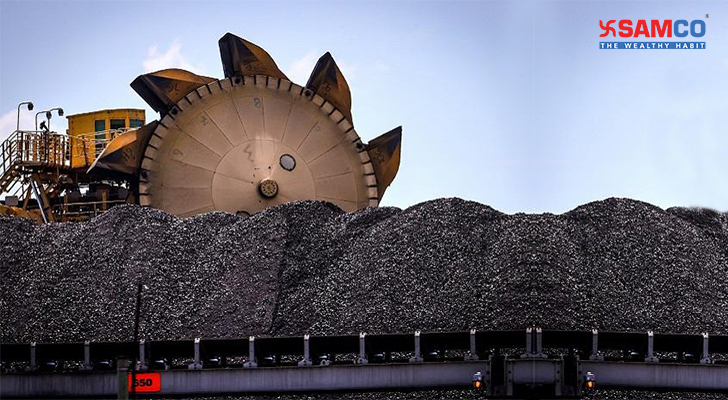 Coal India is a leading coal mining and refining company in India. It was incorporated in 1973 as Coal Mines Authority Ltd. Today it is owned by the Union Government and is managed by the ministry of coal. It also has the title of the world’s largest coal-producing company. The company has a market share of 82% in the coal production industry. The major consumers of the company are power and steel sector companies.

Now, India is the second largest producer of coal in the world. In 2020, it produced about 729 million tonnes of coal. Moreover, the power and steel manufacturing companies use around 57% coal for commercial energy consumption. Coal India is a government-managed company. Most of the coal requirements of the government are fulfilled by Coal India. This makes it a leading monopoly company in the coal production segment.

The company fulfils around 83% of the coal requirements of the company. The company is also diversifying its business by setting up solar power projects and fertilizers plants but still Coal India remains a monopoly company in the coal production segment.

Now if you are wondering which is the best monopoly stock which will mint money for you then you will have to research about each monopoly stock in detail and hold it for the long term.

But when you are investing for the long term, you have to check a lot of things. This list includes analysing financial ratios, quality of the management, analysing future growth prospects of the company, and a lot more… And analysing each stock on these basis is time consuming. So, what is the solution to this?

This basket is specially curated with monopoly stocks which have a reliable network of distributors and are virtually irreplaceable.

Here is a glimpse of the largest irreplaceable networks basket.

Here is how the basket has performed since inception as compared to the Nifty 50 index. 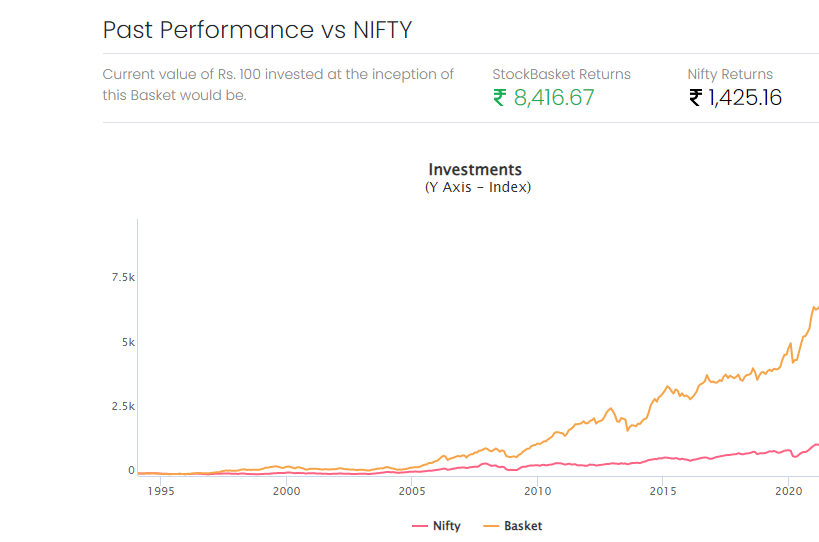 As you can see, Largest Irreplacable Networks Basket has outperformed the Nifty 50 Index since inception. Click here to explore the basket now.

Here are the returns generated by the Largest Irreplacable Networks Basket in the last 5 years.

To invest in StockBasket all you need to do is Open a free demat account with Samco and invest in monopoly stocks listed in India.