It’s rightly said,if it is too good to be true, it probably is a fraud’. When we hear about fraud, we immediately picture the stock market and the name Harshad Mehta comes to mind.

While the Harshad Mehta scandal broke out 28 years ago, the latest web series, ‘Scam 1992: The Harshad Mehta story’, has brought the Amitabh Bacchan of Indian stock market back into the limelight.

But Harshad Mehta is not alone. The Indian stock market has witnessed its fair share of ‘brilliant’ con artists like Ketan Parikh, Ramalinga Raju and Nirav Modi among others. 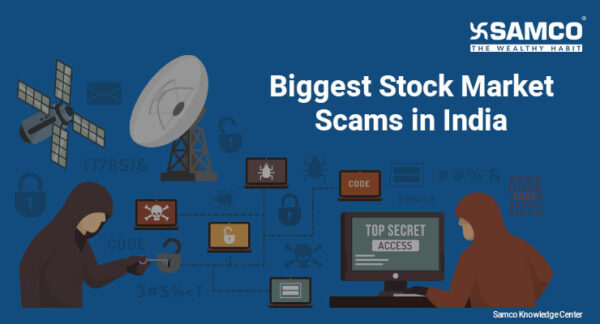 In this article, we are going to discuss the three most famous stock market scams that shook the Indian stock market.

Like every rags to riches story, Harshad Mehta came to Mumbai with only Rs 40 in his pocket. He soon discovered his passion for the stock markets and worked as a stockbroker for a decade before launching his own broking firm, ‘GrowMore Research and Asset Management’ in 1984. 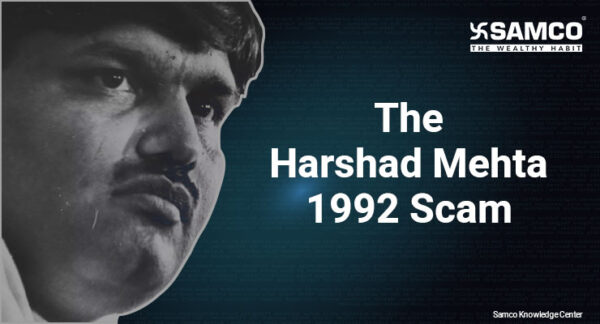 The public sector, private sector and banks were under immense pressure to improve their bottom line after liberalisation of the Indian economy in 1991 amidst the entry of foreign players and increased competition.

But the banks faced a dilemma. They had to compulsorily maintain a fixed percentage in government fixed-income securities with the RBI, known as the statutory liquidity ratio (SLR). Also, they were not allowed to invest in the stock markets. Their surplus capital was sitting in the bank vaults gathering dust.

These banks then decided to loan their excess capital to banks who could not maintain the desired SLR in exchange for interest. The banks would lend money to each other via Ready Forward Deals (RFDs). A RFD is a secured short-term loan from one bank to another against a collateral, i.e. the government bonds.

Instead of actually transferring the bonds, and going through the paperwork, the banks would simply issue Bank Receipts (BR). With Bank Receipts, the actual government securities weren’t transferred, but the short-term buying and selling right was facilitated.

Brokers, like Harshad Mehta, acted as intermediaries between the two banks. The banks would issue the bank receipts in the name of the broker and then the broker would lend the money to the other bank. The lending and the borrowing banks remained unknown to each other.

Harshad Mehta discovered a loophole in this system which would make him the king of Indian stock markets. Since he had become a prominent name in the stock markets by then, he convinced banks to issue him cheques in his own name for buying and selling the BRs.

In a normal RFD deal, only two banks are involved, but in Harshad Mehta’s RFD deals, he involved multiple banks. In addition to this, he also convinced bank officials to create fake bank receipts, which had no collateral. So, basically, he raised crores of money against fake paper receipts.

He cashed these cheques and used the funds to inflate the stock prices. He inflated the stock price of ACC Ltd from Rs 200/share to Rs 9,000/share in just 3 months. Whenever it was time to repay the bank, he would simply sell the stocks at a high price and repay the principal back to the banks. In the off chance that he could not sell his shares, he would approach the third bank and divert their funds to the first bank.

Due to this, the stock markets started rising and a bullish atmosphere was created. Even naive retail investors got attracted and pumped in their hard-earned money. But, since these stock prices were artificially inflated without any fundamental growth prospects, the markets soon fell and it became difficult for Harshad Mehta to sell his shares and repay the banks.

After the fraud was revealed by Sucheta Dalal, as expected, due to lack of fundamental factors, the stock prices crashed and Harshad Mehta was no longer in the position to repay these RFD loans.

The entire 1992 scam was discovered and he was sentenced to 9 years in jail. Reportedly, he scammed the Indian bank’s worth Rs 5,000 crores.

Ketan Parekh was a trainee under Harshad Mehta and spearheaded the second biggest scam in the Indian stock markets. While Harshad Mehta dealt with bank receipts, Ketan Parekh used Pay Orders to scam the Indian banks. He deployed ‘pump and dump’ and ‘circular trading’ strategies to inflate the prices of ten selected stocks, known as the K-10 stocks. 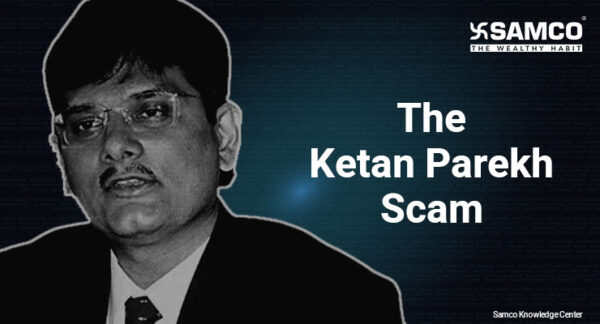 The K-10 stocks mostly consisted of companies from the Information, Communication and Entertainment sector. Amitabh Bacchan Corp, Zee, Pentafour software were some of the K-10 stocks.

He ensured to coincide his investments in these stocks with the 1997-2001 DotCom boom, so that an increase in the stock price of these 10 stocks would not draw unnecessary attention.

He inflated the stock price of HFCL from Rs 42/share to Rs 2,300/share and Global Teleservices from Rs 85/share to Rs 3,100/share. He would then keep his inflated stocks with banks as collateral and get more loans.
At the time, RBI allowed banks to give a maximum loan of 15 Crores to companies, but by bribing the bank officials, he borrowed 800 crores from the MMCB (Madhavpura Mercantile Co-op Bank) and Rs 100 crores from the GTB (Global Trust Bank) without any collateral.

Even the promoters of these K-10 companies paid him to inflate their stock prices. He would then use this money to inflate the stock prices by doing circular trading i.e. trading among select operators only. This would create excess free float in the stock. Retail investors got lured into the stocks due to the excess liquidity.

But when the DotCom bubble burst in 2001-2002, all the K-10 stocks witnessed massive fall in the stock prices. He was unable to sell the stocks or raise any new funds because the MMCB bank and GTB banks were close to being bankrupt.

As the banks were unable to repay its depositors, RBI launched an enquiry into their operations which unearthed the fraud.

Ketan Parekh, having learnt from the best con artist, took all necessary precautions, like timing the investment during the DotCom bubble and using the Calcutta Stock Exchange instead of the BSE, but he was nevertheless caught.

He was barred from stock market trading till 2017. It is estimated that the scam was close to Rs 40,000 Crores. The student clearly surpassed the master.

Satyam computers, a Hyderabad based IT company was founded in 1987 by Mr Ramalinga Raju. It was India’s fastest growing IT company and was listed on the BSE in 1992 and on the NYSE in 2001. 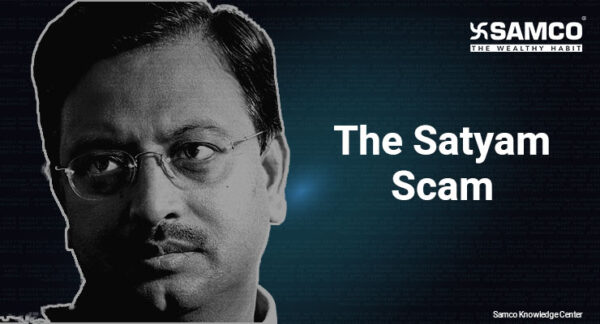 All was smooth sailing for Satyam computers, but the real estate boom turned out to be a bane for Mr Raju. Since he had inside information on the proposed Hyderabad metro route, he opened Maytas infrastructure and Maytas properties and started buying land around the proposed metro route.

But he needed more money to buy more land. He then decided to inflate the stock prices by raising fake sale invoices, and also manipulated bank statements to show higher cash reserves.

All this led to a rise in Satyam’s share price. He and the promoters then decided to sell their stake at the inflated stock prices and use the money to buy properties. Satyam promoters reduced their stake from 24% in 1999 to 2% in 2008.

But the recession of 2008 hit him hard. With real estate prices falling, he was unable to sell the land at a profit. Also, the gap between the real revenue and fake revenue increased to such proportions that he had to reveal his fraud.

Mr Raju confessed to SEBI about the fake invoices, receipts, cash and price manipulations. As expected the stock prices fell and Mr Raju was sentenced to imprisonment. Satyam was acquired by Mahindra Group and renamed as Mahindra Satyam and subsequently merged with Tech Mahindra in 2013.

The catalyst in all these frauds is greed. Harshad Mehta could have simply been a broker in the RFD deals and earned his legal commission, but his greed made him issue fake bank receipts and the banks lost Rs 5,000 crores.

Ketan Parekh could have learned so much from Harshad Mehta, but his rags to riches story ignited in Ketan a greed so big that he outsmarted his mentor and his fraud was worth Rs 40,000 Crores.

Satyam was already one of the fastest-growing IT companies in India, but his greed to follow a trend i.e. the real estate bubble, brought his empire to its knees.

The truth is that greed unites us all. All investors are greedy. We all want high returns in the short-term. The sad truth is that the stock market is filled with dishonest stockbrokers waiting to swindle you.

Hence, selecting the best stockbroker is the most critical element of creating long-term wealth in the stock market. Samco, awarded as the best equity broking house in India, works tirelessly for the benefit of its valued clients. With services like StockBasket and RankMF, Samco offers true diversification to your investment portfolio.