Home/Best Stocks to Buy/List of Power Stocks in India 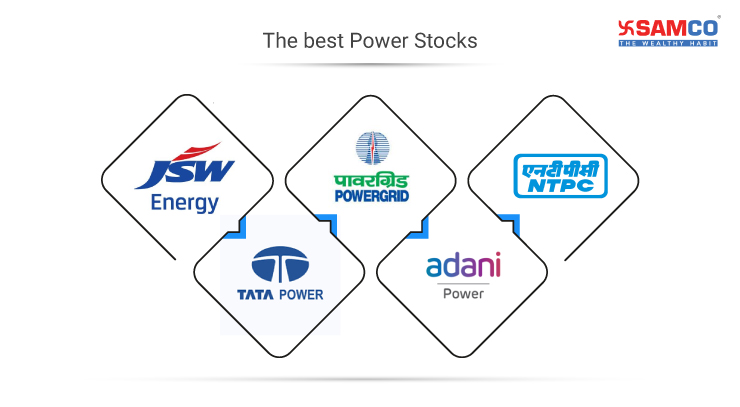 In the last month, power stocks have been in a strong bullish momentum.  The BSE power index has outperformed the Nifty 50 index and is up by 23.42% as on 20th April 2022.

Not just that, the stocks of Adani group have offered magnificent returns and a majority of them are rallying towards making a new all-time high. Adani green energy Ltd. has given  an absolute return of 53%, Adani power Ltd. has generated  an absolute return of 47% and Adani transmission Ltd. has offered a return of 15% in the last month as on 20th April 2022. So, it wouldn’t be wrong to say that power stocks are the talk of the town.

But why are power stocks rallying?

Overview of Power Sector in India

India is the third largest producer and second largest consumer of electricity in the world. But the country is still focusing on generating more power. Hence they have increased the installed capacity from 200 GigaWatts (GWs) to 395.09 GWs as on January 2022.

Out of India’s total installed capacity, the private sector contributes 46.80%. Until 2012, the contribution from the private companies was 27%. But later, the government came up with new policies to encourage private sector participation in the power generation segment.

The biggest advantage for companies in the power sector is that there are high entry barriers. Transmission and distribution segments are under state monopolies. So, if a company desires to enter into the power sector then they will face multiple challenges such as obtaining a distribution license, payment guarantees, selling at a fixed cost and a lot more.

So, the stocks which are currently operating in the power sector are going to stay in the game for the long term.

Now, let’s take a look at the details of the top power stocks in India as per market capitalization.

Adani Green Energy is a part of the Adani group. It is one of the largest renewable energy companies in India. The company is engaged in the business of power generation.  It has a current project portfolio of 20,284 MegaWatt (MW). The company also develops, builds, owns, operates and maintains solar and wind farm projects. This generated energy is then supplied to central and state government entities and government-backed corporations.

Let’s take a look at the key financial ratios of Adani Transmission Limited.

Power Grid Corporation is India’s largest electric power transmission company. It is a public sector undertaking, owned and managed by the Ministry of Power. The government of India holds a 51.34% stake in the company as on March 2021.

It has set up power transmission lines which are 1,72,437 circuits KM long and has a power generation capacity of 4,74,457 Mega Volt Ampere (MVA). The company has over 150 domestic clients and more than 25 international clients.

Currently, the company has 70 power plants which have an energy generation capacity of 63,000 Megawatts (MV) as on June 2020.

In 2020, NTPC acquired the entire government stake in Tehri Hydro Development Corporation Limited (THDC) and North Eastern Electric Power Corporation Ltd (NEEPCO). Both of these companies have an installed capacity of 3,300 MW which is an additional benefit to NTPC.

Tata power is engaged in the business of power generation, transmission and distribution of electricity. It generates electricity through thermal, hydro and renewable energy. The company has a total power generation capacity of 12,808 MV.

The company generates its revenue from these segments.

With this we come to the end of this article on the best power stocks listed in India. Now, it is obvious that the power sector is forever going to be in demand as people are never going to stop using power.

To know which are the best power stocks to buy, all you need to do is visit Samco’s star ratings page and check the ratings for stocks from the power sector. The star rating provided in Samco star is revised daily and is calculated using more than twenty million data points. It also mentions the financial ratios of the stock and pros and cons of investing in the company. So, researching the best power stocks just got simpler.

To invest in any of the power stocks, open a Demat account with Samco.