What is the full form of ICICI Bank? – ICICI Full Form

The full form of ICICI is Industrial Credit and Investment Corporation of India. It was established in 1955 at the initiative of the World Bank, the Government of India, and representatives of Indian industry. The principal objective was to create a development financial institution for providing project financing to Indian businesses.

In 1999, ICICI Bank became the first Indian bank to be listed on the New York Stock Exchange. In 2014, it became the second-largest investment bank in India. Later in 2014, they also became the third-biggest bank as per market capitalization.

There are various private and public banks operating in India. In this article, let’s compare few private banks with the help of ratios. Ratio analysis gives a broader picture of where a particular company stands in comparison to its competitors.

It indicates how much money a company makes for each outstanding share. Companies with higher EPS are considered to be more profitable. This is readily available in the Income Statement of every listed company.

A constant increase in the EPS figure is considered to be a good sign for the company. The best way to form a better opinion is by comparing the same with its competitors.

We can see that HDFC Bank‘s EPS is far more than any other private bank in this comparison. Kotak Bank exhibits a constant rise while Axis bank has fluctuating EPS figures.

Net profit margin is a strong indicator of a company’s success. It measures how much profit is generated as a percentage of sales/revenue. This makes comparison of two or more businesses possible regardless of their size.

By tracking the trends in its net profit margin, we can have a picture of the company’s operating ability.

The past five-year net profit margin does not seem very exciting. We can see the net profit margin went up from 7.90% in 2019 to 13.23% in 2020. However, the performance was better in the previous years in 2016 and 2017. We can say that the company is improving its operations and are getter better at managing their expenses.

Let’s have a look at how did ICICI Bank’s competitor person during the same period.

Axis Bank has a fluctuating net profit margin. Whereas HDFC Bank and Kotak Bank show a constant increase. It means that they are efficiently converting their sales into profits.

This is a long-term profitability ratio that measures how efficiently a company is using its capital.

It is used to perform trend analysis for a company. A higher ROCE is always a favorable. It indicates whether a company is using its capital well or not. It is a useful metric to compare profitability across several companies in an industry.

We see that the bank isn’t doing better than what it was doing five years back. However, there is a slight increase in 2020’s ROCE compared to 2019. Let’s compare other bank’s performance over the last five-years years to understand who has performed better.

ICICI bank’s ROCE has reduced over time. While HDFC Bank has generated a consistent ROCE. DCB Bank’s performance is lower than other banks which makes it a less-preferable option for investors.

Banks provide around 3% interest rate on saving accounts and 6% on fixed deposits. They earn interest on various loans they issue to their clients. For example, car loans, home loans, education loans.

We can observe a slight improvement in the net margin percentage. The shift shows that the bank is trying to generate more revenue from interest rate differences. Let us compare ICICI bank’s net interest margin with its competitors from the year 2016 to 2020.

HDFC Bank and Kotak Bank have the best net interest margins. While ICICI Bank is operating around the 2.5% mark.

Non-Performing Assets are the ones that cease to generate income for the bank.

When the principal or interest payments are not paid by the borrowers, the banks consider them as non-performing assets. Banks often hold a big chunk of NPA. This is because of poor risk management and lending policies.

Here is the non-performing asset of ICICI Bank –

We can observe a sharp and continuous decline in ICICI Bank’s NPA. This is a positive sign indicating that the bank has improved its risk and credit management practices. Let’s have a look at other banks and their NPA level –

There is an overall and continuous decline in NPA levels, which is a good indicator for the sector. However, ICICI Bank’s NPA is still higher than its competitors.

It measures how efficiently a company can convert the money used to buy an asset into profits. This ratio measures a bank’s ability to generate returns from the deposits it receives. ROA is extremely important while analysing banks.

Their return on asset exhibited a constant decline until last year. This does not paint a good picture for the bank. It means that the bank underperformed for years. High NPA could be one reason for low ROA.

HDFC Bank and Kotak Bank have the best ROA. We can observe that ICICI Bank and Axis bank fluctuated on their returns and have underperformed peers by a huge margin 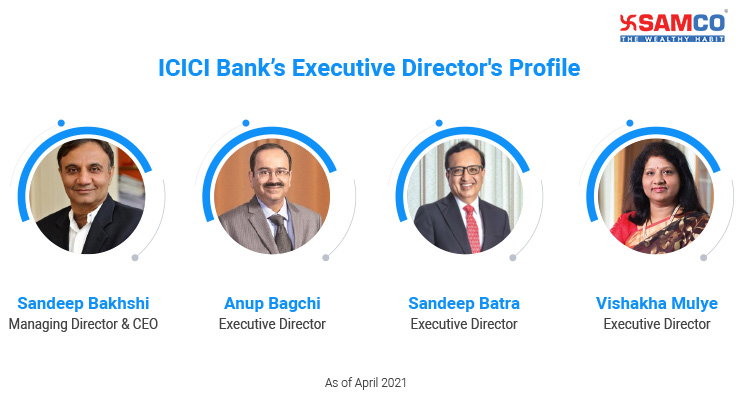 You can find such latest valuations easily on Samco’s share price page for every listed company. Take your first step towards stock market trading by opening a FREE Demat account with SAMCO.

View all of Kinjal Parekh's posts.