Home/Miscellaneous/INR Full Form: What is the Full Form of INR?

What is the Full Form of INR? – INR Full Form

The INR full form is Indian Rupee. It is the official currency of India. It is denoted as  ₹. It is issued and regulated by the Reserve Bank of India (RBI). Over the years the rupee has undergone various changes such as new currency notes, demonetisation and a lot more. 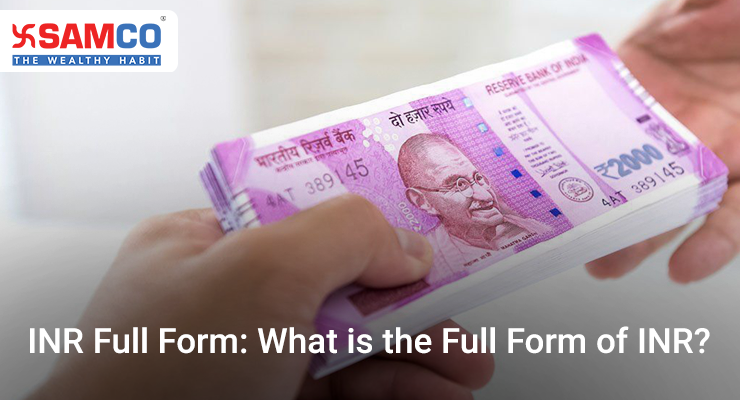 The term Rupiya was first introduced in the 16th century by Sher Shah Suri. During those days Indian coins were made of silver. Each coin weighed 11.66 grams.

Rupiya is a Sanskrit term which means produced silver or shaped silver. The smaller denomination of rupiya was termed paisa. Both of these terms have stuck through the centuries. Even today we refer to it as rupee and paise.

During the first decade of independence, the Anna sequence was introduced. Each Anna had the Ashoka Lion (India’s National Emblem) on it since 1950. One rupee was equal to  16 annas. Each anna was further split into four paisas or twelve pies. As a result, one rupee was worth 16 annas or 64 paisas or 192 pies. As the years passed, India kept issuing many series of annas. They kept experimenting with different denominations and metals. Today one Rupee is made up of hundred paise.

Later, two continuous wars took place. One with China in 1962. Another with Pakistan in 1965. Both of these caused havoc on India’s financial stability. Hence the value of the rupee fell to Rs. 7.57 per US dollar.

The rupee which was previously linked to the British Pound was devalued in 1971 and became directly linked to the US dollar. It was further devalued to Rs. 12 per dollar in 1985. As a result, India was experiencing a currency shortage.

To overcome this shortage, the Indian government issued securities through the RBI which increased the cash supply and prompted expansion. Furthermore, the weight of the Indo-Pak war, combined with the intense dry season resulted in soaring prices. This caused the rupee to plunge to new lows.

There were no outside borrowings on India’s balance sheet until 1947 when the country gained independence, so the Indian rupee was valued equally with the US dollar.  But over the period of time, the Indian rupee has undergone two rounds of depreciation and reached its lowest point of Rs 68.75 in August 2013.

Later, the Indian government took the initiative to curb black money and promote cashless transactions.  In 2016 demonetization of Rs. 500 and Rs. 1,000 notes took place and the RBI announced the circulation of new Rs 500 and Rs 2,000 notes.

Today, according to the Reserve Bank of India Act of 1934 the RBI manages and performs all functions with respect to currency issuance in India. The RBI circulates coins which are issued by the government of India in different denominations like 1 rupee, 2 rupees, 5 rupees, and 10 rupee coins. Recently, Rs 125 coin was introduced by the prime minister on the occasion of the 125th birth anniversary of Srila Bhaktivedanta Swami Prabhupada, founder of ISKCON.

In the year 2010, the symbol for the INR was shifted from Rs. to ₹. The new symbol was configured by Udaya Kumar.

Issuing of the INR:

Across India, RBI has 20 offices which perform various functions including managing currency notes. As of today, we have over 4,422 currency chests and 3,784 small coin depots authorized by RBI for handling currency notes and coins.

All the currency notes are issued under the Minimum Reserve System. This system was introduced by the RBI in 1956. As per this, RBI must maintain a minimum Gold and Foreign Exchange Reserves of Rs 200 Crores. Out of which, Rs 115 crores must be in the form of gold bullion.

How to Analyse if the Currency Note is Original?

The security features that are implemented for issuing currency notes are of great importance. Hence each currency note is crafted with uniqueness.

2. Watermarking: It is a light shaded region which contains the shadow of Mahatma Gandhi.

All of these are printed in intaglio.

You can also trade in different currency pairs.

Recommended reading: Basics of currency trading in IndiaTo trade in currency pairs all you need to do is open a Demat account. Samco provides the best Demat account in India with a robust trading platform – StockNote. Start your wealth creation journey with Samco through the Indian Currency markets today.