Defence stocks in India are in the limelight after Russia attacked Ukraine. The stock markets are in a bearish phase but there are a few defence stocks which continued their bullish rally. You might be wondering, what might be the reason behind the rally in defence stocks.

Well, the reason is…after Russia’s invasion of Ukraine, many countries are forced to hike their defence budget.

Many other countries have also increased their defence budget and hence defence stocks have outperformed in the process. Not just that, as of 2020 India is among the five biggest defence spenders in the world. According to a report by Stockholm International Peace Research Institute (SIPRI), the global military expenditure was increased by 2.6% in a year since 2019. So, we can conclude that all the countries in the world are making defence their priority. The world is in an arms race once again after the end of Cold War.

I know by now you might be wondering how you can make the most out of this growth story. 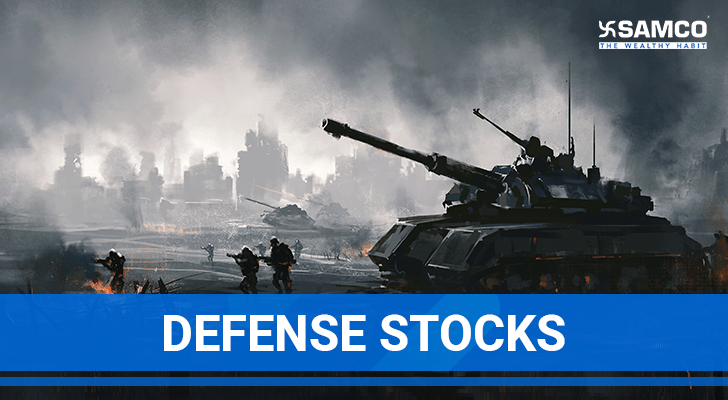 In this article on defence stocks, we will cover –

Overview of the Indian defence sector

Even though the pandemic has impacted the Indian economy, but still, the government has increased its defence spending from Rs. 4.78 lakh crore to Rs. 5.25 lakh crore in the recent Budget 2022. This is a strategic move as all the other countries keep updating their military system with new technology and India needs to keep up with the pace. Why so? Simply because of our neighbouring countries. 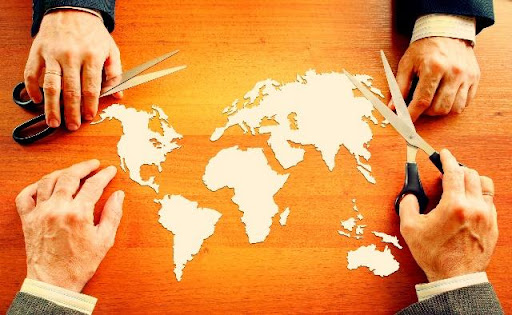 The geopolitical conflicts between India and its neighbouring countries have been increasing in the last few years. In the middle of the pandemic on 5th May 2020, the Indian troops engaged in an aggressive scuffle with China. This happened because India claimed Aksai Chin to be a part of Ladakh while China claimed that it belonged to Xinjiang. 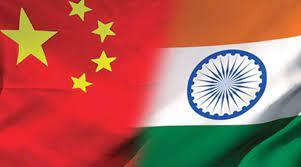 During the same time, India stood as the second-largest importer of military ammunitions after Saudi Arabia. India soon realised that apart from modernizing its military equipment, it must also reduce its dependency on imports.

In the Budget 2022, India announced that 68% of defence-related goods will be allocated to Indian companies. So, only 32% of projects will be outsourced. This will help Indian defence companies get more projects and generate higher revenues. All of this will take defence stocks to new heights.

Since the year 2000, India has constantly increased its allocation to the defence budget too. 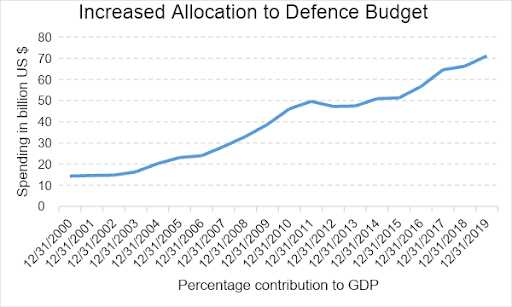 The defence sector is vast. It includes the army, navy and the air force. As of 2021, majority of the defence budget was utilised by the air force segment. In the air force segment, the government focused on modernising aircrafts and other equipments. Moreover, many defence companies have started their own startups to manufacture Unmanned Ariel Vehicles (UAVs).

So, defence companies like Hindustan Aeronautics Limited (HAL) is working on manufacturing lightweight combat aircraft and helicopters. Apart from this, there are many other unlisted companies that are focused on manufacturing drones for defence purposes such as Sagar Defence, ideaForge, etc. By encouraging these companies to manufacture drones, India will someday become self-reliant in the field of defence.

Which are the drone stocks listed on the Indian Stock Exchanges.

From all the factors listed above, it is safe to say that during normal times or during such difficult times every country will definitely spend a considerable amount of money towards strengthening and updating its military. Hence, it wouldn’t be wrong to say that investing in defence stock is always going to be in trend.

List of defence stocks listed on the Indian Stock Exchanges 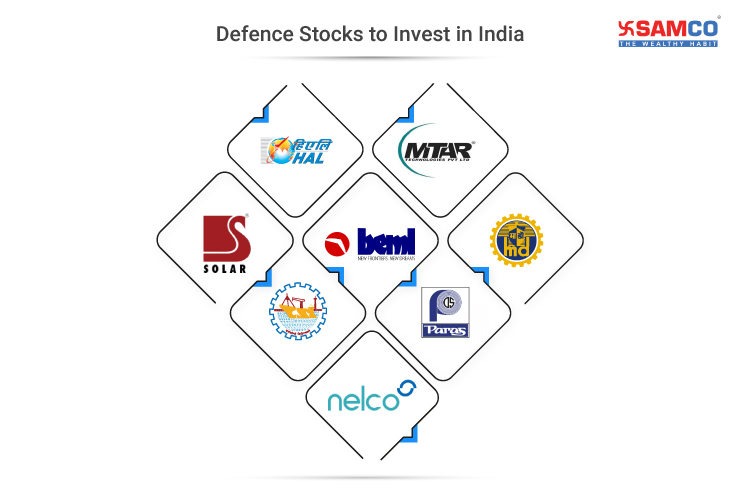 Bharat Electronics Limited (BEL) was established in 1954 in association with France. It was set up to meet the need for electronic equipment of the Indian Defence Services. It is a state-owned aerospace and defence company. It focuses on manufacturing advanced electronics products for ground and aerospace applications.

BEL spends 7.5% of its entire turnover on research and development (R&D). This makes the company the highest spending company on R&D in the Defence Public Sector Undertaking (PSU) space.

Let’s take a look at the key financial ratios of Bharat Electronics Ltd.

Hindustan Aeronautics Ltd. is the backbone of the Indian air force system. It manufactures advanced technology equipment such as lightweight fighter aircraft and helicopters. Apart from manufacturing, it also has the ability to repair these equipments. This makes it the only Indian company which not only has specialization in aircraft manufacturing but can also repair the equipment. The company was ranked 45th amongst the top 100 defence companies across the world.  Just like BEL, Hindustan Aeronautics is also a debt-free company.

Let’s take a look at the key financial ratios of Hindustan Aeronautics Ltd.

Solar Industries is one of the world’s leading manufacturer of bulk explosives and packaged explosives. In 2010 the company entered into the defence segment and diversified its business in two major segments –

The company has also entered into a partnership with Indian Space Research Organisation (ISRO) which will help the ammunition business of the company grow. It has also invested Rs. 14.7 Cr in Skyroot Aerospace. This company will focus on manufacturing space launch vehicles.

Let’s take a look at the key financial ratios of Solar Industries Ltd.

Bharat Dynamics was incorporated in 1970 as a public sector undertaking (PSU) under the ministry of finance. It manufactures missile systems and allied equipment for the Indian Armed Forces.

As of Jan 2021, the company had a total order book of Rs. 8,100 crores. It is also the only company which manufactures medium-range surface-to-air missile system named Akash and Konkur.

The primary business of BEML is manufacturing a wide range of heavy earthmoving types of equipment. It is also involved in manufacturing railway and metro coaches. The company is also a leading defence equipment manufacturer and supplies the Indian Army and other defence forces. The company spends 4% of its revenue on research and development (R&D).

MTAR is a recent listing in the Indian stock market. The company was established in 1970. It manufactures various machine equipment, assemblies, sub-assemblies, and spare parts for energy, nuclear, space, aerospace, defence and other engineering industries.

The company generates 29% of revenues from its nuclear segment, 21% from the space and defence segment and 50% from the clean energy business.

Mazagon Dock is engaged in building & repairing ships, submarines and various types of vessels and related engineering products for various domestic and international clients. It is a leading shipyard in India and it has built 795 vessels including 25 warships ranging from advanced destroyers to missile boats and 3 submarines.

The company generates 89% of its revenues from ship construction, 8% from the sale of base and depot spares and 3% from the ship repair segment.

Let’s look at the key financial ratios of Mazagon Dock

With this we come to an end of our discussion on which are the best defence stocks listed on the Indian Stock Exchanges. With the increased allocation towards the defence sector, it is safe to say that defence stocks are forever going to be in limelight.

Comment below and let us know which are the defence stocks in your portfolio.

To know which defence stocks to buy, simply visit Samco’s Star Ratings Page and check the star ratings of each stock you wish to invest in.

Open a FREE Demat account with Samco Securities now and enjoy trading and investment ideas at your fingertips.