What is breakout in the stock market in the study of technical analysis?

Quite often, stocks have huge moves once they breakout. A simple analogy would be an example of a bird being caged (resistance). As soon as the cage is released/opened the bird flies high and far beyond its resistance. Once resistance level is broken, it often becomes the next level of support when the asset experiences a correction or pullback. Most traders use chart patterns and other technical tools and indicators, such as trend lines, to identify possible resistances for stock prices that are likely to experience break outs. Similar price movements to the downside are more often referred to as breakdowns. A breakout backed by a good volume after a long consolidation period will give a bigger movement as compared to a breakout after a short period of consolidation.

Technical chart patterns such as head and shoulder, triangles and flags that are near completion in their formation and signify upward price movements are also common spots for breakouts. Once price action makes a final movement to confirm the pattern, a price breakout usually follows. 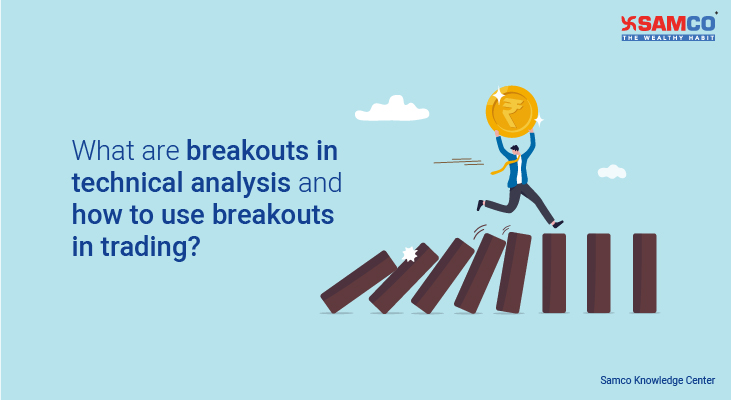 How to identify breakout stocks in trading?

For Exits: Generally exit rules are defined on multiple basis, some use moving average crossovers, others use predefined profit targets depending on the initial risk undertaken and rewards expected, still others follow breakout on the opposite side by half the original breakout period. For example those who use 200 days as breakout entry signal, will use 100 days breakout on the opposite side to book profit. But this requires proper back testing and optimization on the number of days to be used for reversing the trade.

For Stop Loss:  Those who use breakout as a strategy, generally use 2 ATR as stop loss for exit. ATR stands for Average True Range, in a simple sense ATR is the high and low range of the day for x number of days. Generally 14 days average of ATR is taken for calculation. Another way to keep stop loss is to identify support or resistance and place stop loss below or above that level.

Pitfalls: Breakouts are profitable when the markets are trending strongly, and are a nightmare when the markets are in sideways or corrective modes. It would be difficult to know exactly when the correction is over and therefore every breakout has to be attempted because no one knows when a powerful move will start. Thus trading breakout requires lot of steel nerves and the ability to take whipsaw losses. When there are series of whipsaw losses, it is then the time ripe for a powerful move in the making, and therefore the trader must have the stomach to pull the trigger inspite of continuous whipsaw losses that he/she had. Significant news events may also cause price breakouts. These breakouts are more unpredictable and depend on the effects that the news has on a particular security, and therefore may be avoided if it not fundamentally solid.

Trading breakouts is not an easy task. It is counter intuitive. The adage goes “no price is too high to buy and no price is too low to sell” is not digested many and therefore in order to follow such strategy one needs to have strong conviction. Conviction comes from back testing of breakout strategy over multiple time frames for multiple markets and on multiple securities, only then one will be able to employ breakout as a strategy. Breakouts in itself is a complete trading system, if followed rigorously with proper risk management, it will turn out to be very profitable trading system in the long run.