History: This technique of analyzing prices was first used by the Japanese in 17th century. They used this technical analysis tool to study the prices of rice. Although this idea originated from Japan, this technique was later propagated by a legendary called Steve Nison of USA.

How a price Candle is formed?

Each candle represents a price range in a particular time period. So, the most basic data that we need is 4 types of prices: Open, High, Low and Close Price of the period in question. The colored portion of the candlestick is called “the body” or “the real body”. The long or short thin lines that we see above and below the body represent the price range i.e. the High or Low prices respectively. It is technically called as the Shadow of the candle.  If the closing price is higher than the opening price, then the body of the candlestick is drawn with bottom as its opening price and top of the body as its closing price and vice versa in case of closing price being lower than the opening price. Both the types of candlesticks formed will be represented by different colors. The candlestick charts have been widely used by most of the traders because it has far more appealing visuals, easy to interpret and also very intuitive.

Candlestick shapes and its interpretation:

Based on the Open, High, Low and Closing prices a particular shape and size of a candle is formed. As per its theory such formations have a specific name and its price interpretation. The list of certain formations is mentioned below:

Conclusion:- Candlestick patterns are very specific setups for trading which can define clearly stop loss levels. When used with other studies such as moving averages, support – resistance levels, over bought -over sold indicators, knowledge of candlestick patterns can act as high probability set ups for trading with extremely favorable risk to reward ratios. In a trader’s arsenal candlesticks are a must to fire super profits.

You can also watch our series on Candlestick analysis by clicking on the thumbnail below. 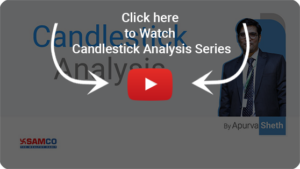