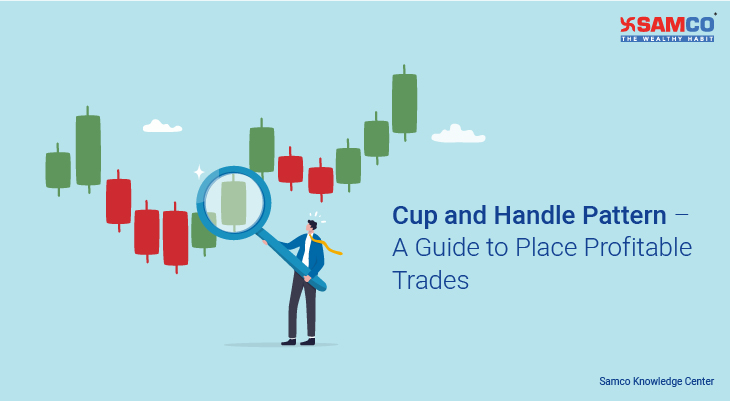 Let’s have a cup of tea. This is something you hear every day. But little did you know…if you had carefully studied the cup from which you drink your tea every day, you would be a millionaire by now. Sounds unreal? Well, it isn’t. That’s because the tea cup has given rise to a very popular price pattern named the cup and handle pattern. This pattern is one of the most popular bullish continuation patterns which can help you mint money in the stock markets.

But before we get into what is a cup and handle pattern and understand how to interpret it, let’s look at how the pattern looks like with the help of a real tea cup.

But when it comes to the formation of the pattern on a chart, there is so much involved in it. So, without further delay, let’s explore everything about the cup and handle pattern.

What is a Cup and Handle Pattern?

But before we understand the cup and handle pattern, let’s understand what is a bullish continuation pattern.

What Is a Bullish Continuation Pattern?

A bullish continuation indicates that the uptrend is going to sustain in the future. So, a continuation pattern would occur in the middle of an uptrend and signal that once the pattern is complete and once you receive a confirmation, the uptrend will resume.

Now let’s look at the cup and handle pattern and take a look at its formation and components. 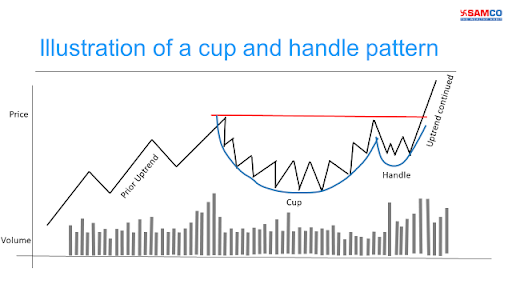 The cup and handle pattern has two major components.

Firstly, as this is a bullish continuation pattern, there must be a prior uptrend. Then the cup is formed followed by the handle. Once the stock price breaks out surpassing the resistance level (the red line) and you get a confirmation, it is said that the uptrend will continue.

The Psychology Behind the Formation of Cup and Handle Pattern 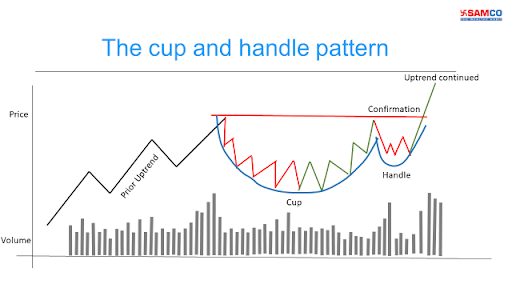 Firstly, there is a prior uptrend in the stock. During this uptrend, traders get quite optimistic about the stock. Few traders who bought the stock at the beginning of the uptrend or during the rally are making good profits.

But, few naive traders who do not follow the charts buy the stock at the resistance level (the red straight line) thinking that the stock price would rise further. But as the stock is near to the resistance level, smart traders who had bought the stock at the beginning of the uptrend start to book profits which increases the selling pressure pushing the stock prices down. This initiates the formation of the left side of the cup (the red part on the inside of the cup).

Now, if the stock has good fundamentals, eventually fund managers, institutional investors and smart investors will step in to buy the stock when it is undervalued. This will generate demand and form a support level which is called the bottom of the cup.

Once the bottom of the cup is established, the stock starts climbing higher which forms the right side of the cup (the green part on the inside of the cup). This up move is a sign that big investors are buying the stock which increases demand and the stock price goes up.

The up move pauses near the red line…but why is it so? That’s because the traders who had bought the stock at the left edge thinking that the stock would go up didn’t sell the stock and saw the entire cup formation. At this point they are no longer expecting a profit, all they want is their capital back. So, they sell the shares and the selling pressure leads to the formation of a resistance line.

The reflection of human emotions is seen in the chart and the formation of the handle takes place.

But what is the psychology behind the formation of the handle?

The handle is a section where fearful traders sell off their stocks at small profits, breakeven or even at a small loss.

The consolidation we see in the handle is basically a shakeout from the weaker hands from the stock.

Now, let’s talk a bit about the volumes.

Volume Analysis of the Cup and Handle Pattern

When the stock is near the resistance level, there will be heavy selling, which will result in high volumes. And when the stock is forming a handle, the volume will be light. This shows that weaker hands are selling the stock while committed investors who bought the stock at the bottom of the cup are sitting tight.

Let’s get back to our pattern. The red line in our chart is the resistance line. It is a level which the stock touches and comes back down as we saw during the formation of a handle. If the stock breaks that resistance level with high volumes and closes above it for a few days, it is said that the share is in strong momentum and we can expect a good up move.

But the question is, why does the stock move up after there is a breakout?

Now, during the formation of the handle, most of the sellers sell their stocks. So, at this point, the shares are held by people who have a strong conviction in the stock. As there are minimum to no sellers, buyers can easily push the prices up.

Who are going to be the sellers in this case? These are the traders who had entered into the short position at the handle. Looking at the strong bullish momentum, they will run to cover their positions in losses. Whereas, as there has been a breakout, more and more traders will turn optimistic about the stock and buy it which contributes to the up move.

How to Trade Using the Cup and Handle Pattern? 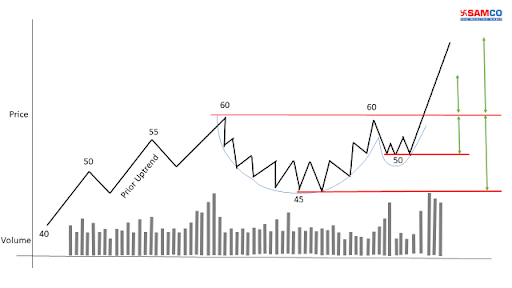 On the same chart, we have plotted prices. So, initially, the stock rallies from Rs. 40 to Rs. 60 to form the left edge of the cup. It then goes down to Rs. 45 to form the base of the cup and again rallies back to Rs. 60, hits the resistance line and forms the right edge.

Because of selling pressure, the stock forms a handle and hits a low of Rs. 50.

We all know by now, you must place a trade after the stock breaks out of the resistance level and closes above it for a few days. In this case, you can enter into the position above Rs. 60.

But, when is the right time to exit the trade?

There are two methods to calculate it.

It is obvious that the higher the price target, the more time it will take for you to achieve the target. So, if you are a short term trader you can go with the smaller price target. Long term investors can prefer going with the bigger price target.

Now, let’s talk about risks. We all know that there is no surety that the stock will reach the price targets we have determined and hence it is important to place a stop loss. You can place a stop loss near the price where the handle was formed. In this case, it is Rs. 50.

Real-Life Examples of a Cup and Handle Pattern 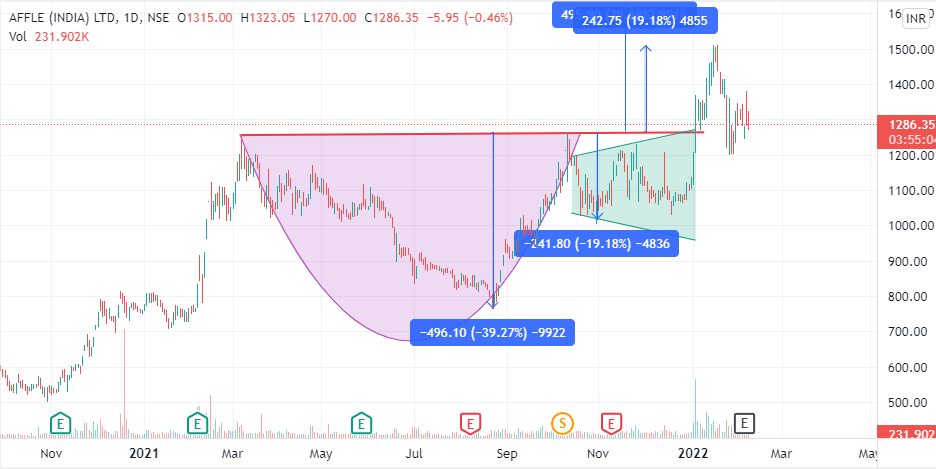 The cup and handle pattern formed in Affle India 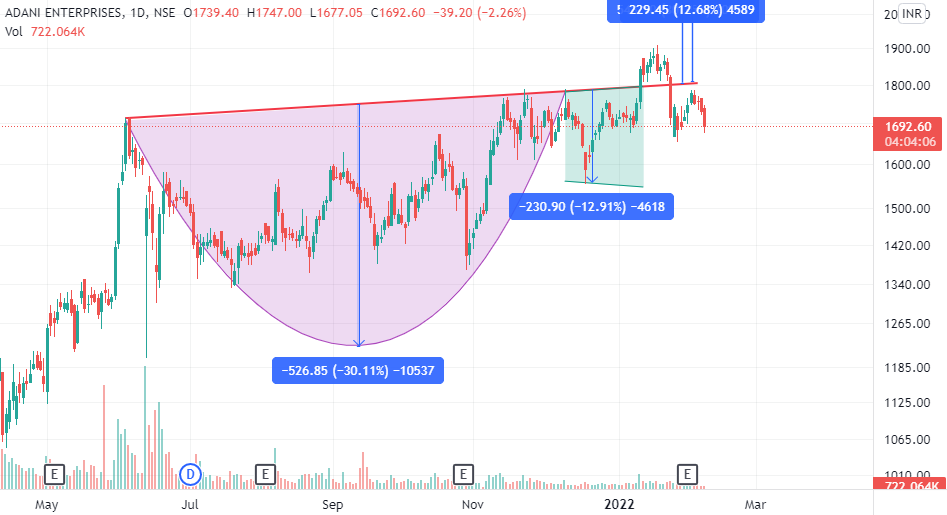 The cup and handle pattern formed in Adani Enterprises

As we can see, the cup and handle pattern is quite evident with a resistance level of Rs. 1,797.90.

As this is an ongoing pattern, we have just seen a breakout in the stock. The smaller target according to the calculation is Rs.  2,005.85 and the higher target is Rs. 2,355.70. The stop loss according to the handle Rs. 1,576.95. One thing to notice here is that even if we have seen a breakout, the volumes are light which indicates a weak momentum.

The cup and handle pattern is very popular among traders as it comes with a high success ratio but it also comes with its own risk. Hence, whenever you place a trade, make sure to add a stop loss. This will help you cut your position in a small loss if something goes wrong.

Moreover, you must closely monitor the volumes recorded during breakout. This is because if the stock has low volume during breakout then the uptrend is less likely to sustain.

Volume plays a very important role in trading. Here is a video on volume analysis you must watch before you start trading.

With this we have come to the end of understanding the cup and handle pattern. But, don’t worry, your learning process does not end here. Read the next article which is a guide on the head and shoulder pattern and take a step ahead towards learning about technical analysis.

Our Chief Market’s Editor, Apurva Sheth, has created a playlist on the basics of technical analysis. Check it out by clicking here!

To start trading, open a FREE Demat account with Samco and apply your learnings to make money from the stock markets.